While I had my pots and pans out dyeing roving, I decided to dye some yarn for a colour fade idea I’ve had in my head for a while.  The colours had been inspired by me knitting the Wintergreen Mitts.

I wanted to mix the same blues and blue-greens again, but my idea required double knitting instead of 4ply. After a wee miscalculation and some over-dyeing I ended up with these… 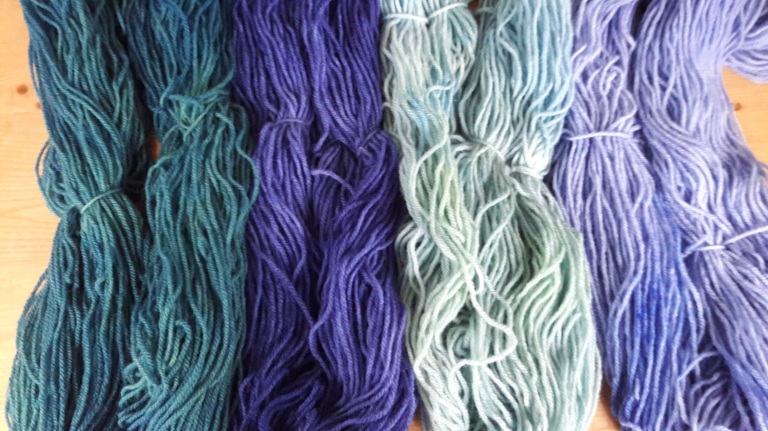 I wrestle pictures in my mind of each combination for the rest of the evening. However, in the middle of the night I woke up remembering a trick that a lovely DYC customer had shown me. If you take a picture of your yarn in black and white, it will show you which colours are really most saturated (is that the word I’m looking for?)

So this morning I took some pictures…

It’s funny how we try to fool ourselves. All the time I couldn’t prove the pale blue-green was the less intense colour, I carried on arguing with myself, even though I really knew the truth.  Once the camera gave me indisputable evidence, I stopped arguing.

However, I am now arguing with myself that the difference between the two darker and two lighter skeins is too much and I ought to dye two in-between blue skeins and knit the whole thing blue. I’m also concerned the camera is showing me that the dark blue-green skein is less marginally less intense than the dark blue skein. What do you think?

24 thoughts on “Determining the intensity of Colour Fade Yarns”