A couple of weeks ago I decided to learn to draw faces.  First off I scribbled along with a YouTube video and learned to draw faces looking in different directions.

After watching a few more YouTube videos, I followed their general instructions to draw a larger face. The result was okay, but not realistic.

I was particularly unimpressed with the nose, so decided that was the part of the face to start learning to draw better first. Watching more videos, and reading a few tutorials too, I attempted to draw some noses.

The key to drawing a nose is that most of it’s shading. However, despite the nose videos and tutorials, and also having watched a few shading videos, I still was very unhappy with my noses.

Recognising that I never intended to be a portrait artist anyway, I gave up, thinking I’d just wasted a couple of hours.

A few of days later I had a go at drawing some fairy faces with easier noses. This also involved exploring a little about drawing hair.

After that I decided to return to faces once I’d learnt to draw bodies. However a week later I decided to draw a still life of some leaves and logs.  Although it’s far from perfect, I found the shading so much easier to do. I also did it all with just a 2B pencil. 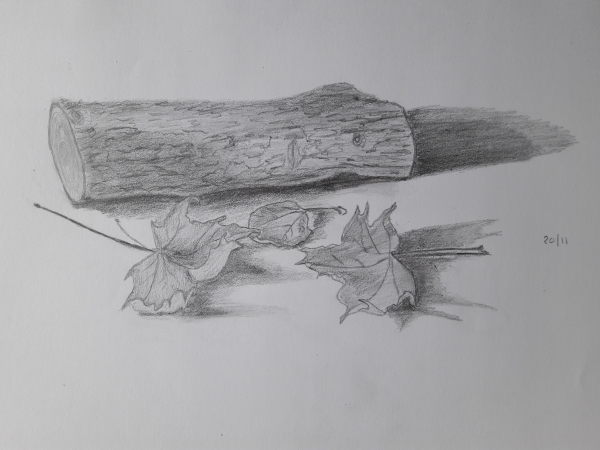 So I guess the time spent attempting to draw a decent nose wasn’t wasted after all.   And who knows? I might yet become portrait artist anyway 😉